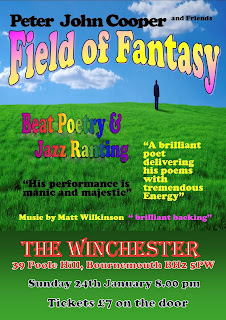 Beat Poetry and Jazz Ranting by Peter John Cooper with music by Matt Wilkinson.
"A brilliant poet delivering his poems with tremendous energy"
"...Manic and Majestic"

It was SOMETHING yesterday!

“Nothing”
“Hard to imagine”
Posted by Peter John Cooper at 12:30 pm No comments: 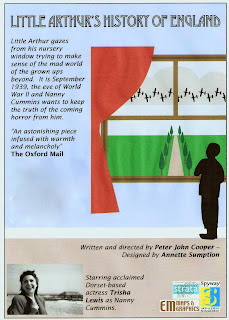 is the name of a popular history from the Victorian Era written by Lady Maria Callcott. Touchingly, it became a favourite of the young men in the trenches of the Great War. 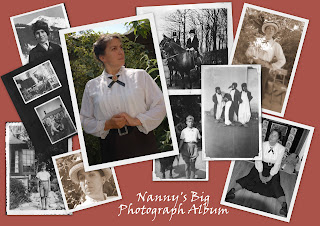 The Play
Little Arthur gazes from his nursery window trying to make sense of the mad world of the grown ups beyond
“Little Arthur’s History of England” starring Trisaha Lewis is a one woman play about the life of a Nanny and her charge in the nursery of a big house during the days and nights of September 1939. Nanny Cummins is more than a little eccentric and is definitely larger than life. During the course of the play we learn of Nanny’s life, disappointments and attitudes to the looming conflict as she reads from the big history book that she keeps on the nursery shelf. From time to time she fortifies herself with a swig from her special medicine bottle that she keeps hidden under her pillow. In the end Nanny knows she cannot keep the truth from her little Arthur and in a dramatic climax we come to understand the secret that Nanny herself has kept hidden all these years...
When it was first performed in Oxford, The Oxford Mail said it was an “An astonishing piece infused with warmth and melancholy”


Trisha Lewis
Trisha is a Bournemouth based actress with an enormous range of professional work to her credit. Trisha is extremely well known for her work in Dorset and the South and over the years has specialised in single-handed portrayals of strong and quirky women such as Joyce Grenfell , Mary Woolstonecraft and Virgina Woolfe.
Reviews of Trisha’s work:
"..Inspirational solo performance..”
“…confident and beautiful acting…”
( Hampshire Chronicle)
“….utterly unforgettable”
(Chester Chronicle)


Spyway Projects(http://www.spyway.co.uk/) is a Dorset based theatre company bringing together writer and director Peter John Cooper, designer Annette Sumption and many other professional musicians, designers and performers. Over the past seventeen years they have produced shows as varied as the world premiere of Bafta winning writer Guy Hibbert’s ‘Tilting Ground’, through Alan Ayckbourne’s ‘Intimate Exchanges’, Neil Simon’s ‘Same Time Next Year’ and the UK Tour of ‘Captain Pugwash and the Monster of Green Island’.


Nanny:
Nanny had a peculiar place in the life of the big house. She lived on the Family Side of the Green Baize Door so was set apart from the rest of the staff and could almost be regarded as a member of the family. Nanny could command the butler, cook and housekeeper and accompanied the family on any trip or outing that the children were on. She could even order the car and chauffeur for trips out herself. But this strange place in the hierarchy often meant that Nanny felt isolated and alone. It was not unusual for her to develop strange manners and customs. As she grew older, her foibles and eccentricities would be accepted and tolerated.
Some parts of the character of Nanny Cummins are based on Peter John Cooper’s own mother who was Nanny in several big houses before the Second World War.
Posted by Peter John Cooper at 10:53 am No comments:

On Tuesday Tara Dominick asked me to fill in as a guest on her morning show on Hope FM. As this was a Community strand she asked me to talk about theatre from a community perspective. This was a good opportunity for me to try and put my thoughts in some sort of order and we had a jolly pleasant hour or so talking about my favourite subject.
One of my friends missed the show but wanted to hear what I had said. As Hope FM doesn’t have a “listen again” feature I thought I’d try and jot down my thoughts here.
A radio interview is like an argument with a loved one – you can always come up with the perfect rejoinder just as you’re walking away. So if some of this sounds a bit too coherent and too good to be true, it probably is. There’s also quite a lot tacked on at the end that I know we didn’t talk about but which I thought might be worth bunging in as a free extra.

Strange Sea Sighed
Building on the thirty plus years of experience I have had in this field I hope to bring together aspiring and established writers within the area and to facilitate them working within the many disparate communities of Dorset and to reflect the stories that exist within those communities.
Some years ago, when I was Artistic Director of the Oxfordshire Touring Theatre, I developed a new way for working with overlooked communities. We sent writers and actors to live in these communities and listen to and record the stories they had. At first, these would tend to be about the history of the place or group but bit by bit, by gentle prompting we could tease out the real issues and tales that they actually were talking about at that moment. We could turn these into a properly considered play that could be played back to them. And what’s more we could take these plays into other communities as a form of county wide gossip. It was delicious.
Now I’m trying to recreate that idea in Dorset with the Rattle project. I hope I can rattle up a few bones or even dust off some skeletons that might be lurking in various cupboards. Later this month we are presenting “The Strange Sea Sighed” in Swanage. This reflects the weirdness of Swanage back to those who live here or visit here and enables them to see the place we love in a new and unexpected light.

Little Arthur
The word “community” is overused but I believe that we belong to many different communities at once. It may be a group of friends sitting round a table in a pub, it may be an interest group, a geographical group, a hobby group, a religious group, a political party or whatever. My philosophy is based on the idea that stories are what bind these communities together.
Even more interesting is the idea that we belong to several communities at once. They may overlap but quite often we keep these quite separate. They have their own cultures, codes of language and stories. We all know that we switch these cultures and codes continuously between, say, our family, our mates in the pub, our hobby groups.
But we tend not to value these communities and their cultures. Dorset is probably one of the most culturally unaware areas in the United Kingdom. We are a county of incomers as much as we are old families; but our culture is handed down from the histories of communities that we probably do not belong to or relate to. Culturally the county is fragmented into a myriad of many different communities that do not overlap. East and West have separate newspapers, television and radio stations. We do not even have a linking transport infrastructure. What we lack is the ability to gossip and to relay our stories from one community to another.
Through the Rattle project I hope to make people aware of the real stories that glue our many cultures together and to help us to understand where we stand in relation to each other and the world outside. It is a project that will give some sort of reality to new writers who can find juicy big chunks of story to get their teeth into and to get those stories told in a way that is valued by all of us living here.
That means the project has to be professional and able to carry ideas through to an end point. It means that these stories have to be repeated and carried through various communities.
For many years I have been running creative writing workshops, mentoring new writers and trying to encourage established writers to write about the Dorset of here and now. I have been working with poets and developing my own poetry performance skills.
Now is the time to put this all to the test.
I have already found a number of nodal points that are going to give the project an interesting kickstart. The Tank Museum in Bovington is providing a thrilling opening night venue for “Little Arthur’s History of England” on the 3rd of September. I want to work with them and communities like them to make the relationship long term, developing the contemporary reactions to the historical stories that they relate.

Cafe Conversations
One of the problems we have in Dorset is that our creative talent tends to bleed away out of the County. Young people train in Weymouth, Poole and Bournemouth but then find few outlets for their abilities. Even established artists find it difficult to make themselves heard in the County and tend to work anywhere but here. That’s why I want to put those aspiring and established writers together; to strike sparks off each other and, perhaps, find an entirely new voice for Dorset.
I want to develop the Rattle project to the next stage of reality. I need new equipment to draw performers into the fold. I need to be able publicise and run workshops and mentoring sessions. I need to get established writers involved. Above all I must drive onwards to a programme of professionally finished performance that enables the work to be shared and seen.
The first project to operate like this will be called “Cafe Conversations”. Our stable of writers will be encouraged to go and listen to people talking, arguing, joking in cafes and restaurants in some particular environment. They’ll respond to these by producing a number of ten minute two hander plays. We’ll then rehearse these and send them back to the place where they were first heard. And can be played out again to the unsuspecting coffee drinkers.
So would you like to take part? Are you someone who’d like to develop your writing skills for the theatre? Or are you an established writer who would like to work alongside a new writer? Collaborating and mentoring? Would you like to explore the virgin jungle of stories in the communities of Dorset? Contact me: Peter John Cooper on spyway@avnet.co.uk or check out the Spyway website http://www.spyway.co.uk/
Posted by Peter John Cooper at 7:56 pm No comments: