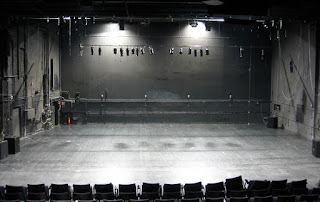 Skidmore and I were having a drink in a bar one evening after attending a performance of some dire piece of performance work masquerading as drama when he suddenly said “I’ve written a few pieces for the magazine at Uni, I think I’ll have a go at writing a play next.  How do I go about it? What sort of story is best for a play?  How long should it be?”  And suddenly everything goes all wobbly and the room spins round and round as in an old episode of Doctor Who.  Mind you I had been drinking home brewed scrumpy all evening but I did think this was one of those portals into those time loops where our actions are repeated over and over again for ever and I had had this conversation so many times before.


I asked, as I do every time “Why do you want to write a play?  Why not a novel or a short story or a poem?”


“There’s a competition I’d like to enter.  I definitely think I could win it.  All I want is an idea and I’ll give it a go.”


Well, that’s an answer I suppose.  Not one I wanted to hear.  Perhaps I should have phrased it differently.  “What is the idea you have that can only be expressed as a play?  What are the particular attributes of the narrative that make it so that it can only be expressed in a play?  Plays are hard work and if you could express yourself in a short story or even a haiku, you’d have a lot less heart-ache.”


But this time our young hopeful is not to be put off. “It can’t be that difficult.  You write them all the time.”


Well, yes, I couldn’t disagree.  There is no actual law against anyone having a go at such an undertaking.  And in answer to his initial enquiry I had to admit there are no actual rules about how much and what subject. And I never, ever advise people about how they should write. But I liked Skidmore for all his rather callow, erratic, exuberant approach to the world and I didn’t want him to get involved in something that might make him unhappy so I thought I might try and guide him with a few pearls.


All right, I say “How much experience do you have of theatre?  How much do you know about that unique relationship between actors and audiences?  What do you know and expect of your own relationship with the audience?”


“I don’t think I need to go into that too much.  That’s for the director to sort out.”


That is also true.  Up to a point.  Directors need to be given freedom to explore the subject and don’t need to be told how to direct a play.  Particularly by someone like Skidmore.  But that’s not what I’m driving at, either.


“So you’re saying that you don’t need to engage with the audience yourself?  You place your work before them and they like it or lump it.  A tiny bit arrogant, don’t you think?”


Skidmore frowned at that.  I don’t think he’d ever been called arrogant before.  Then he brightened as he always does in adversity. “I think you’re deliberately misunderstanding me. Anyway, the play is just the words.  I leave the gubbins to the techies.”


Now there you are wrong, young Skidmore.  Comprehensively irredeemably wrong.  Plays are not works of literature.  They are one part of a huge collaborative effort by actors, directors, lighting people, audiences, cleaners, ice-cream sellers.  That’s why I say to all new writers who have to listen to me ranting on from my stool in the corner of the bar: “Before you put pen to paper you must get to know theatre and the way it works.  You need to have all that firmly planted in your mind, the smell of sawdust and of paint, the sounds of rehearsals in a draughty hall somewhere, the anxiety of the producer that the thing is about to work.  You need to know all this because a play needs to come from the theatre and is not bolted onto it.  Have you read Peer Brook’s “The Empty Space”?”  But when I looked up, Skidmore had ceased listening and was attending to his I-phone.


The answer I should have given right from the start was, “If you want to write plays then start by getting stuck into theatre.”  I really was getting worked up.  This was a subject I had decided views on and I wasn’t going to be ignored.  “Now listen here, young fellow.  It doesn’t really matter whether it’s professional or amateur but you must understand theatre as a living, breathing organism before you can begin to think about delivering the instructions that will prod this leviathan into motion.  It also doesn’t really matter what you are going to do within the theatre.  Just be somewhere where you can observe and learn.  When I got thrown out of school I hitch-hiked to London and not knowing anything better, I went from stage door to stage door asking if there was any work to be had.  By some extraordinary fluke heard of a job as a stage hand.  It was from the vantage point of the side of the stage that I was able to watch great actors and theatre makers at work.  Later, I became a very junior stage manager in the North West of England.  It was sitting in on rehearsals in freezing cold rehearsal rooms, marking up prompt copies with coloured pencils held in shaking gloved hands that I learnt how the hidden mechanisms of plays actually work.  What paths the directors and actors took through the intricacies of scripts, how they came to understand what a play was about and how best to serve the script…”  I tailed off because Skidmore had lost interest in my c.v. altogether and had wandered off to drink tequilas with some old buddies from Uni. Leaving me to carry on musing about the subject.


Theatre is the oldest expression of some of the deepest human instincts.  The playwright’s job is to lead the complex process of thought that leads to that expression.  Yet in the twenty-first century many of the enormous possibilities of drama have been lost to a superficial welter of acrobatics, music and visual effect while the skills of playwriting, character construction and dialogue have been downgraded to that of mere pen holder for other theatre makers. For three thousand years, theatre has provided a crucible of thought and argument.  It has challenged the status quo and reflected on the great changes in society and watched civilizations come and go.  It has mocked the privileged and epicene and it has raised to our consciousness those who are oppressed and down trodden.  It has provided relief in the times of crisis and serious dialogue when things were going smoothly.  It can be both ridiculously funny and jarringly emotional.  It provides high ritual and low cunning.  But because playwriting is seen as something of a dilletante pass time, the subject of many university theses, it has lost its heart and soul.  Aspiring playwrights like Skidmore are encouraged to write ten minute sketches for competitions instead of committing the years of work necessary for real drama.


“What you want to do Young Skidmore, is devote yourself to cutting through all the obfuscation and razzamatazz and get back to the heart and soul of the thing…  Read Peter Brook… Skidmore…  Skidmore!
Posted by Peter John Cooper at 3:15 pm No comments: