The Death of the Hurdy Gurdy Boy - Some reviews

'The Death of the Hurdy Gurdy Boy' started out as a story for my teenage daughter.  Cross over fiction is now very popular with a general readership picking up novels originally aimed at a younger readership.  Think Harry Potter and Hunger Games.  Nothing wrong with that, young people have been enjoying adult novels since the days of Jane Austen, why not share in the other direction?  J.K. Rowling and Suzanne Collins are well aware of the potential. My writing for theatre has always been predicated on the idea that anyone can access a good story and get something out of it and what holds good for drama must hold for other art forms.  And that doesn't mean that the writer needs to back pedal on the issues. Younger people respond well to be treated as adults and having their intelligence challenged.  So the good writer neither talks down to a younger audience nor dilutes what they are saying and the language they use to say it. 'The Death of the Hurdy Gurdy Boy' and its companion novels  deal with the ideas of homelessness, death and loss of family, poverty but it also has the positives of perseverance, companionship and love. And because it's me writing them, they are also funny and whimsical with a rich language and, I hope, a banging good read..

Here are a couple of the reviews that are coming in from Amazon.

Well written story with an insight to a boys life in the past and his new found friend of the future. Good conclusion and would recommend it to my friends.

An anytime book which will leave you wanting to read more.. Actually it’s a good holiday read for a sunny day under a brolly with a jug of crushed ice. I enjoyed it. Easy Kindle bought and easy to read. 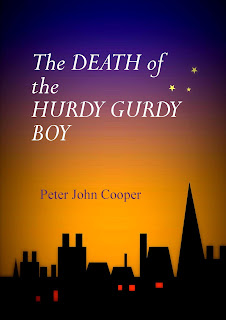 Posted by Peter John Cooper at 1:10 pm No comments:

60009 The Union of South Africa Approaches Chippenham at speed

On 3 July 1938 4468 Mallard ; the Nigel Gresley designed streamlined pacific, set a world speed record of 126 mph (202.8 km/h), pulling six coaches and a dynamometer car. In honour of this 75th anniversary I have included my poem about Mallard's sister engine 'Union of South Africa' Five hundred tons of steel
Cast iron, coal,
Bone, wood, glass
Water, Blood, brass
Brain tissue and fire
Travelling at 75 miles an hour
(The limit for steam trains
On Network Rail)
But Enough sheer energy
To suck the breath from your body
To smash you to cells
To reduce you to nothing more than a red mist
Or to make the hairs on the back of your neck
Stand up and wave.
Thrown down the track with unimaginable power
60009 The Union of South Africa
Approaches Chippenham.

There is only the lulled hubbub
Of the evening station
A parked car waiting for some late commuter
Two station staff
Talking quietly
Then, for a second
The watchers of the night
See a brief whisp of light
See the single small light
As some distant planet….

Boiler pressure is 250 psi
Walschaerts gear on the outside cylinders, and
Gresley's conjugated gear for the inside cylinder.
Kylchap double-blastpipe exhaust,
and Westinghouse QSA Brake Valves.
Mere words that sum up
Something cataclysmically alive

Now, listening out
hear that unmistakable
Syncopation in the distance
we may not know what it means
No louder than a sewing machine
Click-a-click-a-click-click
6 beats per revolution
At 16 seconds just as our hearing begins to register
The faint sound is interrupted
By the four chimes
And the mechanical voice of the station announcement
Stand well away from the edge of platform 2.
(We know this is only a machine speaking
Because there is no anticipation in the voice
No expectation
That this thing
This living thing
Is hurtling towards it)
Stand well away
Those who
Are in the know
Have heard the staccato
Off beat
Have turned and
Are watching the single small light
Growing from the distance
No adequate warning of what is coming
Stand well away from the edge of platform 2.
The approaching…
One of the significant features of the Gresley A4s
Was the specially designed chime whistle
Removed and melted down in the war
Because they sounded too much
Like air raid sirens.
But all remade and replaced
So that its voice is unmistakable throughout the known univese
Stand well away from the edge of platform 2.  The approaching…
But the electric voice is smashed to pieces
By that hungry howl
That wells up from the bowels of hell
And would snatch you away
If you were standing any closer
It screams as if in a deep ecstasy
And just when you cannot stand anymore
The train
Is on you
Past you
A flash in the station lights
And already the carriages are
Crashing by
This is as close as we ever shall be to the pounding heart of God
And the long, long whistle
Modulates through Doppler
Down, down until you are almost sick
With the dragging at your guts.

“That was loud enough Gareth”
“ I should think.”

Posted by Peter John Cooper at 4:28 pm No comments: