Where does Language come from

I'm always interested in ideas about language, where it comes from and how  it operates.  Click on the link at the top of this post to see some interesting new ideas.
Posted by Peter John Cooper at 4:21 pm 1 comment:

I have always been fascinated by the way people talk to each other.  In playwriting we call it dialogue, in everyday parlance it is conversation. It is the broken, halted and halting, lame, repetitive jumble of words that tries to convey some meaning between individuals.  As a playwright it is my stock in trade and, despite many hours sitting on buses and in cafes trying to capture its essence, I have never come near to being able to reproducing dialogue in its true sense.  What is wonderful is that most dialogue exchanges make no sense at all when recorded.  Sense and syntax become so jumbled, vocabulary so wretched and torn that trying to find a way of describing it for others to follow is a nonsense.  From these entirely non-scientific observations I have distilled my laws of dialogue: 1) Nobody says what they mean.   Dialoguers circumlocute, they prevaricate, they even lie.  In fact they lie most of the time “How are you feeling today?”  “Not so bad” is a lie we have heard every day.  It means “I’d really love to tell you how bad I feel and how i would like your sympathy but I don’t know whee to start and anyway you are not really interested I can tell.”  2) Dialoguers seldom listen to each other.  Each exchange is a series of statements about oneself.  “Yes I know.  I had the same thing myself.  Well worse, actually”.  3)Nobody talks in straight lines.  The idea of a reasoned argument is laughable.  In a dialogue one makes a series of statements about oneself (See 2) which come under the general heading of the topic being discussed.  This inevitably leads on to 4) Dialoguers can change points of view in a single sentence so that they appear to be holding two utterly contradictory points of view at the same time.   In rhetoric we could say they are advancing a “On the one hand.... on the other hand....”  sort of argument.  But that is not true.  They are just saying and believing completely different and random things. 5) Most dialogue is filled up with nonsense words, phrases and sounds.  I believe linguists call these “phatic exchanges” in which it is the exchange not the meaning which is important. “How’s it going?” is phatic.  But then we get into Malinowski and Sociolinguistics so we’ll step away from that pretty smartly.6) Repetition is mandatory.  Mostly because dialoguers have forgotten what they were saying 2 minutes ago and this is the real idea that is playing in their head cinema, not that stuff you are waffling on about.
In fact, think about the rules of “Just a Minute” in which the contestants have to speak for 60 seconds on a topic without deviation, hesitation or repetition and you have the reverse of the exact rules for actual dialogue.
Posted by Peter John Cooper at 8:32 am No comments: 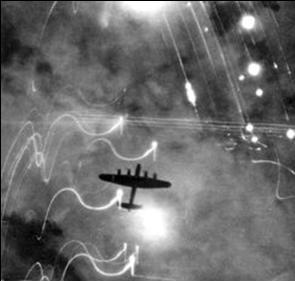 In March of 1944, Nicholas Alkemade was the tail gunner in a British Lancaster bomber on a night mission to Berlin when his plane was attacked by German fighters. When the captain ordered the crew to bail out, Alkemade looked back into the plane and discovered that his parachute was in flames. He chose to jump without a parachute rather than to stay in the burning plane. He fell 18,000 feet, landing in trees, underbrush, and drifted snow. He twisted his knee and had some cuts, but was otherwise all right.

Suddenly all is quiet

All the noise has stopped and I am falling

And now I know the time of my death.

And I will be smashed into the soft black Dutch earth.

That’s three and half miles to you

It will take me a full minute and a half

The air rushing by my leather flying cap

But now I am at peace

In a world at war

Knowing that I am falling

Falling towards the earth.

I have chosen this course

I have chosen to die by jumping

My parachute a mass of flames

So I launched myself

Past the jagged metal

The trail of fuel flame

Lighting the night sky in a streamer of glory descending

How many times over the past months

Have I done the calculation

As have all the beery boys in the mess

In that time when we are walking back

In grim fraternity when the alcohol leaves only a bitter taste.

And now I am alone

With only the stars for company

As in some Suffolk lane trailing the others home

Turning and rolling I spread my arms

How long have I been falling

In No more than thirty seconds

The ground wil rise to meet me

Like a soft dark lover coming out of the darkness

Of a hidden doorway to embrace me with

I have lived with death all around me

The time of dying so clearly,

Falling through the winter night sky.

For a moment I am buoyed by the air

But I know that I am accelerating

Second by second until I reach terminal velocity

Of around 125 miles an hour

And the ground embraces me.

Than to go down in a burning coffin

The flames scorching and scouring with pain

Here there is no pain

I am the only man

Apart from the one facing the firing squad

Or with a noose around his neck

Who knows the exact moment

When he will reach the great darkness and whatever lies beyond.

And lying in the snow, in the now

But, by some miracle, living,

To face the sort of death

That other men look forward to

And never know the time of its coming.
Posted by Peter John Cooper at 5:27 am No comments:

I was devastated to hear about 100% cuts in funding to Oxfordshire Theatre Company and Forest Forge. These two companies represent a vital part of cultural life in the South.  The cuts seem to be wretched and arbitrary and will leave a big gap that will not be filled by any other means.  We all lose. Oxfordshire Theatre Company I have a particular regard for as I was fortunate enough to be the first Artistic Director of Oxfordshire Touring Theatre Company as it was then known throughout the 1980s.  Both of these companies have maintained and developed theire artistic standards whilst doing the vital job of bringing theatre to people and communities who would otherwise have no access to live performance.  They must not disappear.  All of those who have had associations with these companies should contact them now and see if there is any support that can be giving to keep the wheels rolling past 2012.
Meanwhile, our best regards to all those who are currently part of these companies and good luck for the future, whatever it may hold.


Posted by Peter John Cooper at 2:39 pm No comments:

As I writer with a penchant for a sort of sub sci-fi genre that uses snippets of information from real science as a jumping off point for a world just like our own but not quite, I love reading New Scientist.  It contains as much weird stuff as you could hope for.  Today an artist who tries to explore the idea of Hyperbolic shapes.  An April Fool?  I sincerely hope not.
Posted by Peter John Cooper at 1:15 pm No comments: