Words From a Revolution

This is journalism at its best.  Christine Aziz has embedded herself in the life of Alexandria and gives quite a different view of Egypt from the brief headlines. Follow her blog Words From a Revolution
Posted by Peter John Cooper at 11:34 am No comments:

Mary Anning and the Spaceman

Henry T. De la Beche (1796 1855) began his geological career within an elite circle (Geological Society of London, 1817; FRS, 1819), collaborating with influential gentlemen geologists and publishing original research. When his independent income dwindled, De la Beche managed to secure governmental funding for his mapping projects. This led to recognition of the Geological Ordnance Survey (1835) with De la Beche as director. However, De la Beche’s most influential role emerged from his unique position of successfully bridging the privileged circle of gentlemen geologists and the working class of emerging professionals. Henry De la Beche advocated education and knowledge of the Earth for all social classes. He used his government influence to lobby for the establishment of facilities and organizations dedicated to geology’s growing professionalization and popularization. The Museum of Practical Geology, School of Mines, and Mining Records Office were founded largely through his efforts, and each included educational components. De la Beche believed that geological instruction should transcend social boundaries, and thus he was an early advocate for the instruction of lower classes. Henry De la Beche can be acknowledged as an early champion of geological literacy for the general population.
What is fascinating, is that this is from  The Smithsonian/NASA Astrophysics Data System, a strange place for such an earth-bound subject.
Posted by Peter John Cooper at 4:42 pm No comments:

Mary Anning - The next step

I've been away from the Mar Anning play for some time.  I have been concentrating on the schools side of the project ("Mary Anning's Fossil Depot") and now I need to get down to some serious writing for the more challenging part.  More challenging, only because its important to say something new and drawn from my opinions on the subject.  For schools work I tend to stick to what is known and what is properly authenticated.  With "The Cabinet Maker's Daughter" for As One Theatre I am going to be more contentious and make surmises and assumptions. I expect members of the audience to disagree with what I write but I am going to make sure that what I write will be within the realms of what is known.  In other words, as in my previous play for AsOne "She Opened the Door" about Thomas Hardy's wife, Emma I am going to peer into those gaps in between the known facts.  They still have to join up with reality but in an attempt to portray what I think Mary Anning's possible thoughts, beliefs and motivations I have to push the boat of possibility out onto potentially choppy waters.

Anyway, we have a poster (which is always an enormous help) and a synopsis which goes like this:


Mary Anning, in the last days of her life and increasingly dependent on laudenum to quell the pain of her encroaching cancer, battles with her over-protective companion Susan as she tries to complete the collection and presentation of one last fossil that will rock the world .  But into this frenzy bursts her long term friend Henry de la Beche. Henry’s arrival only adds to the turmoil with his presence awaking emotions in Mary that she thought long since buried.  He has extraordinary news to tell her but Mary seems unable to grasp what he is saying and together they embark on a strange journey back through her life, partly dream, partly memory revisiting places and events long gone and peopled by strange amalgams of her friends, enemies and even the dinosaurs she has spent her life carving from the living rock.  In this dream world she meets and talks to her little dog Tray killed in a rock fall long ago.  Through it all is her enigmatic relationship of Henry and, at the end when he is able to reveal the great news he bears, can Mary find resolution and peace.
A play about life and death, frustration and achievement, dreams and memories of long, long ago.

In other words, I'm going to introduce Mary Anning's life long friend Henry de la Beche and explore the possibilities of that relationship.  So that means a great deal more research to see if I can find the gaps and crevices in his life and what made him and Mary tick.   WARNING: this will not be the chick lit version of Mary that we see in other novels and representations.  And Susan will probably not end with that name. 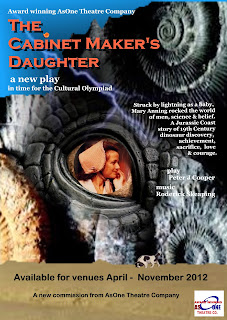 Posted by Peter John Cooper at 10:04 am No comments: